The attack against Saudi Arabia’s oil facilities is a wake-up call to dangers in the oil market, according to Chevron CEO Michael Wirth.

“Perhaps the market had grown a little bit comfortable with risks that we never became comfortable with,” Wirth told CNBC’s “Closing Bell” Monday. “These events demonstrate that those risks are real.”

Energy stocks, including Chevron, surged Monday after a weekend drone strike attack wiped out about half of Saudi Arabia’s daily crude production. The coordinated attack hit the heart of the Saudi oil industry, forcing the kingdom to cut oil output in half. News of the attack sent oil prices skyrocketing for their highest percentage gain in history.

Wirth said these risks are “a feature” of Chevron’s business and “while you can never predict when an event like this might occur, you always need to be prepared.”

The attack knocked out 5.7 million barrels of daily crude production — or 50% of the kingdom’s oil output. The national oil company, Saudi Aramco, reportedly aims to restore about a third of its crude output by Monday. But Bloomberg News reported it could take weeks before Aramco brings back the majority of its oil output.

“If there’s a company that can rebound quickly from something like this, it’s Saudi Aramco,” Wirth said.

Secretary of State Mike Pompeo said Saturday that Iran was responsible for the drone attacks. President Trump told reporters on Monday afternoon that he was in no rush to respond to the attacks on Saudi oil facilities. He also said “it was a very big attack” that could be met with a much larger attack. Iranian President Hassan Rouhani said, at a press briefing Monday, that the attack was self-defense by Houthis and a retaliatory response for Saudi attacks on Yemen.

On Sunday, Trump authorized the release of oil from the U.S. strategic petroleum reserve, which he said would be released if needed to keep the market well supplied.

Chevron’s Wirth said making those barrels available and “calming markets” is the “right thing for the president to do.”

Historically, Chevron has been the top performing Dow stock after oil surges, according to a CNBC analysis. CNBC used Kensho, a hedge fund analytics tool, to track which Dow Jones Industrial Average stocks performed the best performers a week after oil rises 5% or more in a single day. It found that Chevron averages a 1.84% return the week after. Exxon Mobil also outperforms the broader market. Shares of Chevron are up 14% year to date, and closed 2% higher Monday.

Wirth said a full-scale war in the Middle East would likely move prices higher, but “everybody hopes to avoid something like that and I’m not privy to anything of that thinking.” 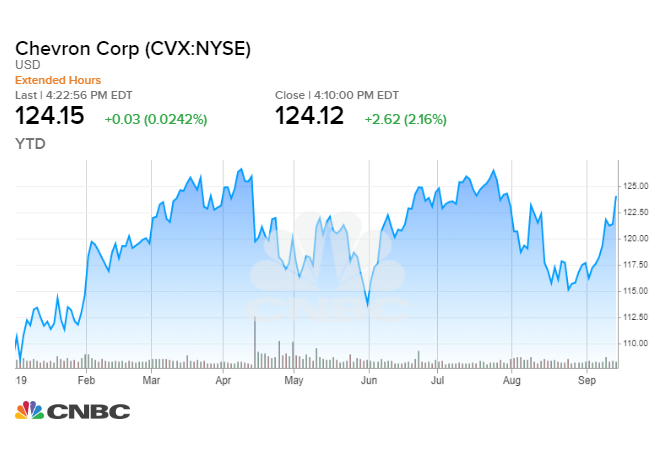