In just the last 24 hours, the CEOs of WeWork, eBay and Juul have all stepped down from their posts, the continuation of a record-setting pace of exits this year by the heads of U.S. businesses.

U.S. based companies announced 159 CEO changes in August, 28% higher than the 124 CEO exits in July and the most ever in a month, according to business and executive coaching firm Challenger, Gray & Christmas. Through August, there were 1,009 U.S. CEO departures in 2019, according to Challenger, more than at the same point in 2008 when the economy was embroiled in the financial crisis.

Experts says there has been a shift to more accountability because of worries about the slowing economic expansion, which has been the longest in U.S. history.

“CEOs are now being held on a shorter leash,” said Jeffrey Sonnenfeld, a senior associate dean at the Yale School of Management. “When the puffery and the rhetoric doesn’t match reality, the boards are under pressure to hold the CEOs accountable.” 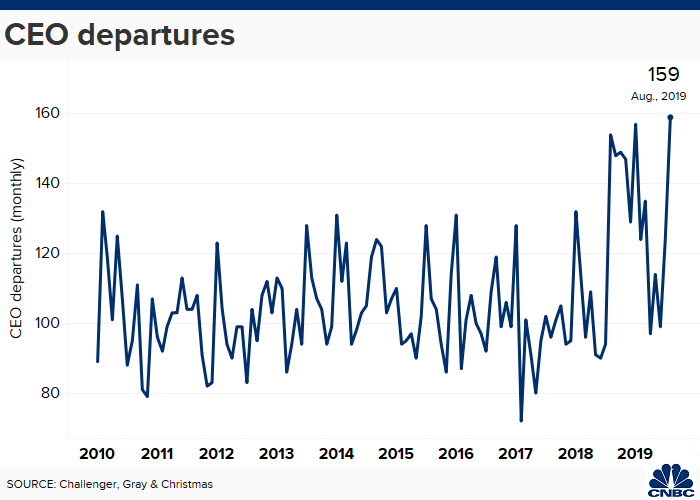 2008 was the second-highest year for CEO turnover with 992 executives leaving through August, 2% lower that the current year-to-date performance.

“With growing uncertainty surrounding global business and market strength, the fact that so many companies are choosing this moment to find new leadership is no coincidence,” said Andrew Challenger, Vice President of Challenger, Gray & Christmas, in a release.

Amidst talks about going public, WeWork’s CEO Adam Neumann announced Tuesday he was stepping down from the coworking rental space company after an uproar over governance.

Volkswagen, Nissan and Comscore all lost their chief executives this month.

Why is this happening?

Uncertainty over the U.S.-China trade war and slowing global growth caused the chief executives of the nation’s biggest companies to downgrade their outlook for the U.S. economy, a survey last week showed.

The Business Roundtable said its members now forecast growth this year will clock in at 2.3%, down from last quarter’s estimate of 2.6%.

“People want to leave on a high,” said Sonnenfeld. “They want to get out when the goings good.”

But the most important trend contributing to the turnover in CEOs is an overall change in tolerance from company’s boards, Sonnenfeld said.

In a year where companies like Uber and Lyft are going public without clear paths to profitability, investors are starting to worry if betting on the growth companies that lead the bull market the past 10 years is really the best idea, especially facing economic downturn.

“CEOs that have started to believe their own myth making, are being held accountable,” said Sonnenfeld.

There is another factor at play. CEOs are getting old.

Baby boomers, those born between 1952 and 1956 are all entering their mid-to-late 60s, causing a massive exit from the workforce.

“There’s a generational change going on,” said Sonnenfeld. “”So that is one thing that’s hitting in great numbers is the absolute peak of the baby boomers” retiring.

But not every CEO is being held to the same standards.

Bucking the trend of accountability, CEOs like Tesla‘s Elon Musk and even Facebook‘s founder Mark Zuckerberg are seemingly infallible in the eyes of their board members and shareholders no matter what they do, said Sonnenfeld.

“Elon Musk is the poster-child for just that syndrome of a board that still hasn’t put a leash on a brilliant creator,” said Sonnenfeld.

Watch Fed Chair Powell talk live about the economy, interest rates at ECB forum
Pending Home Sales See Surprise Rebound In May, But Experts Warn Housing Market Is ‘Undergoing A Transition’
Millennials want to retire early at 59. Here’s how to make that happen
Nike earnings top Wall Street’s expectations, despite inflation in the U.S. and Covid lockdowns in China
Stock futures slip after the S&P 500’s worst first half since 1970