DoubleLine CEO Jeffrey Gundlach believes the bottom for interest rates is in for 2019.

“It’s not a great idea to bet on low interest rates,” Gundlach said in an investor webcast on Tuesday. When asked if he would buy 10-year Treasury now, Gundlach said “absolutely not.”

The yield on the benchmark 10-year Treasury breached below 1.5% in August, while the 30-year Treasury bond yield fell below 2% for the first time ever as the U.S.-China trade war escalated. 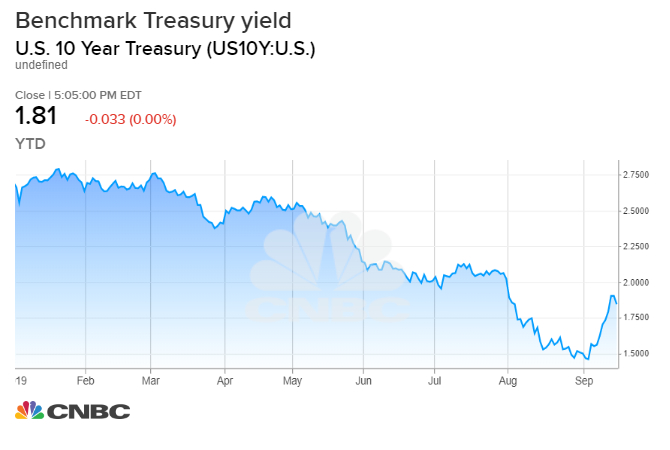 The Federal Reserve conducted a repurchase operation Tuesday involving $53 billion worth of various debt instruments as it seeks to control the level of its benchmark interest rate. Gundlach said the central bank will see the “repo” move as a “warning sign” and will resume expansion of its balance sheet.

“The freeze-up can only be viewed as a negative,” Gundlach said. “They are baby-stepping their way to doing QE.”

The Federal Open Market Committee will announce their decision on interest rates on Wednesday. Gundlach said he expects the Fed to cut rates by a quarter point.

Gundlach, a respected markets forecaster, oversees $130 billion of assets under management at DoubleLine, according to its website.