People walk past a board with the logo of Bitcoin in a street in Yerevan, Armenia September 9, 2019.

This has been a tough week for bitcoin.

The world’s first and largest cryptocurrency plunged more than 20% over seven days, hitting a low of $7,757 Friday — its lowest level since June. Bitcoin futures meanwhile, were on pace for their worst week of the year.

The cryptocurrency — known for its volatility — had been relatively stable since August, trading in the $10,000 range until this week. The sharp drop below $8,000 began Monday, and continued to sell off throughout the trading week. Other major cyrpotcurrencies ether and XRP are down 24 and 19% for the week, respectively.

As is often the case in cryptocurrency markets, analysts were unable to point to one specific catalyst for the price drop.

One theory investors pointed to was a lackluster debut of a new bitcoin futures product. On Sunday, the Intercontinental Exchange, parent company of the New York Stock Exchange, launched its futures contracts on a platform called Bakkt as a way to usher in new bitcoin investors who may have been cautious about trading on exchanges.

Michael Moro, CEO of Genesis Trading, said there was a “sell the news” effect after the Bakkt launch — especially after what was “perceived as a low-volume launch,” he said.

“Anticipation for Bakkt was really high in Asia, and fairly or unfairly, the launch was counted on as a positive price catalyst,” Moro said.

Moro said low demand for a new product is normal. But disappointed bitcoin investors sold, and set off a cascade of liquidation. 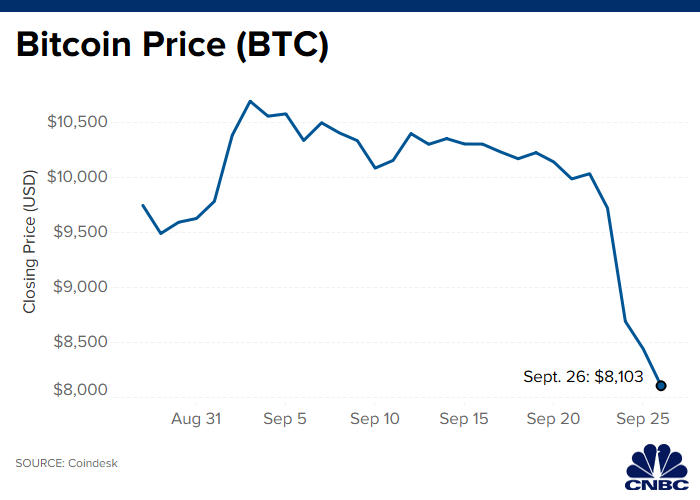 Brian Kelly, CEO of BKCM, said that selling was exacerbated by a key $9,000 technical level being broken on Monday. The next level investors are watching is $7,500 — the price at which Kelly said mining bitcoin becomes unprofitable. The bitcoin “mining” process uses high computing power to compete and solve a complex math equation. The winning miner gets bitcoin as a reward for successfully completing the equation.

Jeff Dorman, chief investment officer at Los Angeles-based digital asset manager Arca, said none of the explanations this week really add up, and he “can’t remember a time when a crypto price move has made less sense.”

“While no one has perfect clarity ahead of big moves, and fast and violent price moves are often unpredictable, it has historically been possible at least to rationalize large moves after the fact,” he said. “But three days after this decline started, there still haven’t been any valid explanations.”

Dorman said the best explanation was investors selling on a rumor about a decline in hash rates, which is a measure of how fast bitcoin miners can solve equations, as well as the “disappointing” launch for Bakkt. The selling was made worse by stop loss liquidations, where people automatically sell when bitcoin hits a certain level.

“The continuation of the selling pressure may be based on confusion, as the market tries to regain equilibrium even though neither buyers or sellers really understand why we’re here in the first place,” Dorman said.

Still, bitcoin has roughly doubled since the beginning of the year. Prices got a boost this summer after Facebook announced its own planned libra cryptocurrency, which analyst said brought more legitimacy to the space. Bitcoin is nowhere near its all-time seen near $20,000 in December 2017.

Disney is counting on Bob Iger to make hard decisions about its streaming and TV assets — or find someone who will
Frontier Airlines gets rid of telephone customer service
Adidas launches investigation into Ye conduct claims
Will Congress Restore The Tax Incentive For Research Spending?
What’s Up With Rents?