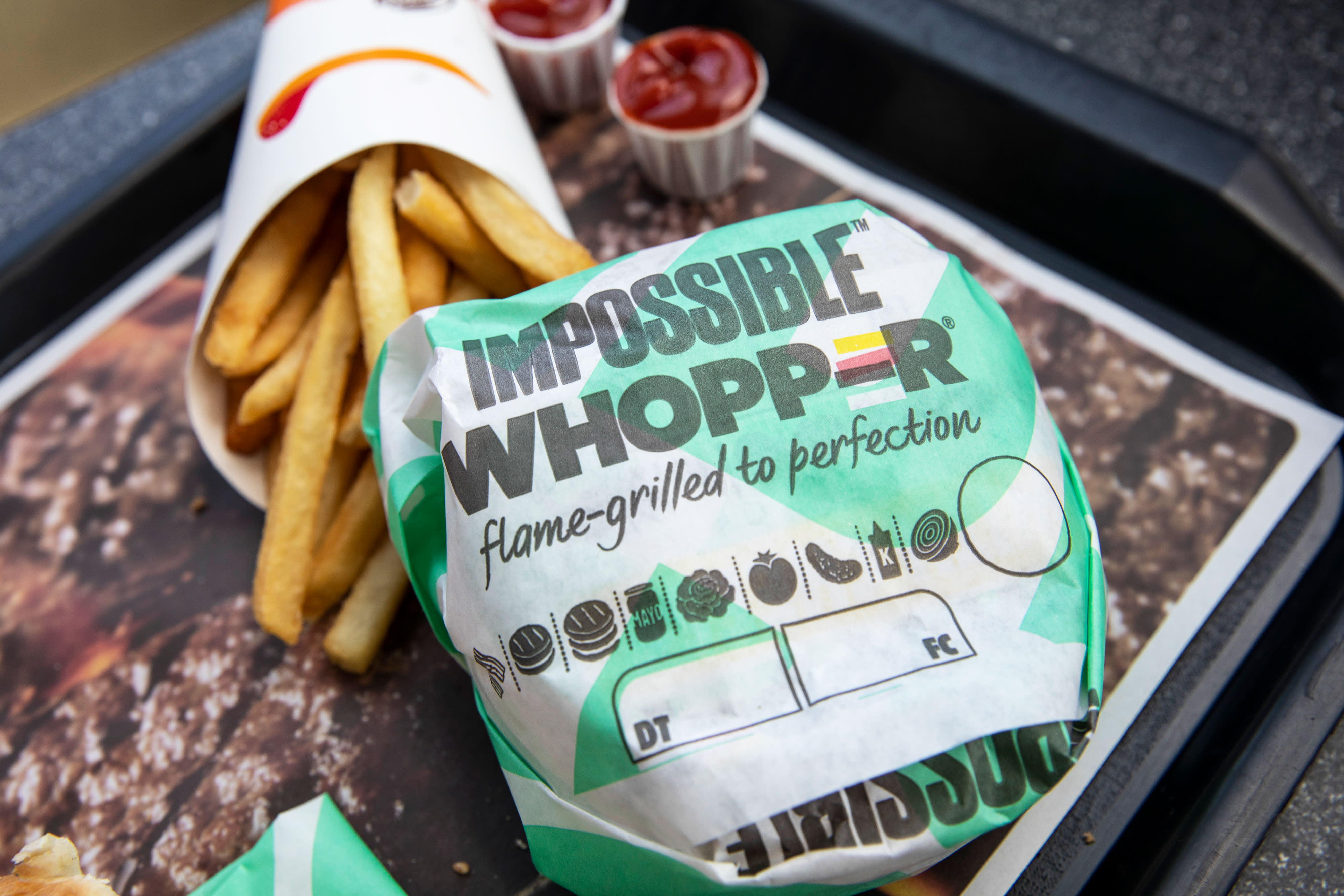 In this photo illustration, the new Impossible Whopper sits on a table at a Burger King restaurant on August 8, 2019 in Brooklyn, New York.

As concerns mount over the dangers of a rapidly warming planet, upstart food companies are targeting a major climate-damaging food: beef.

Beyond Meat and its privately held rival Impossible Foods have recently grabbed headlines and fast-food deals for their plant-based burgers that imitate the taste of beef.

They’ve also turned the environmental benefits of abstaining from meat into a key marketing tool for their products — drawing some skepticism from environmental researchers who say plant diets are healthier and less carbon emitting than producing processed plant-based products.

Animal agriculture is responsible for 14.5% of global greenhouse emissions, according to the United Nations’ Food and Agriculture Organization, with 65% of those emissions coming from beef and dairy cattle. Scientists warn that climate change will trigger an international food crisis unless humans change the way they produce meat and use land.

While companies producing imitation meat boast of the environmental benefits, some researchers point out that for people wanting to substantially lower their carbon footprint, having unprocessed plant-based diets instead of eating imitation products is healthier and better for the planet.

Beyond and Impossible use different sources of proteins to create their meatless meats. Beyond primarily works with protein from peas, while Impossible uses genetically modified soy.

“It makes sense to develop alternatives to beef, because we have to change our eating habits to more plant-based diets if we want to limit global warming to under 2 degrees Celsius. Impossible and Beyond tap into this market,” said Marco Springmann, a senior environmental researcher at the University of Oxford.

“However, while their processed products have about half the carbon footprint that chicken does, they also have 5 times more of a footprint than a bean patty,” he said. “So Beyond and Impossible go somewhere towards reducing your carbon footprint, but saying it’s the most climate friendly thing to do — that’s a false promise.”

In fact, a recent landmark report from the Intergovernmental Panel on Climate Change, a group of UN scientists, said that shifting towards plant-based diets would be a critical way to mitigate and adapt to climate change, as simply cutting carbon emissions from automobiles and factories won’t be enough to avert an impending crisis.

“On the consumption side, with people in developed countries wanting more cheap meat, and now in developing countries people wanting cheaper meat — it’s pushing the planet in the wrong direction,” said Hans-Otto Portner, a climatologist who co-chairs the IPCC’s working group on impacts, adaptation and vulnerability.

“It’s not sustainable. It’s a warning signal. If the world wants to keep to the UN’s sustainable development goals by 2030, there is something wrong here, there is a mismatch.”

Millennials driving shift away from meat

On Beyond Meat’s website, “positively impacting climate change” is listed second, behind “improving human health.” The founders of both Beyond and Impossible have named the environment as the motivating factor for creating their businesses.

Mintel found that 16% of U.S. consumers avoid animal products for environmental reasons. That reasoning is much more common with the 18 to 34 year olds, with nearly a quarter of that demographic saying that rationale applied to them.

“There’s a large enough group of millennials where it’s worth it to them to pay for more for their food. They take into account the values of the company, whether it’s best for the environment,” said Kit Yarrow, a professor at Golden Gate University who researches consumer psychology.

Products from Beyond and Impossible target flexitarians – people are looking to consume less meat. For the same reason, if you look for a Beyond Burger in the grocery store, you’re more likely to find it in the meat case than next to other vegan or vegetarian options.

There has been a historical dietary shift away from beef in the U.S. American consumers eat about a third less beef than they did in the 1970s, according to the World Resources Institute.

Promoting dietary shifts can be complicated, and assessing the impact of these changes on an international scale involves making assumptions about agricultural practices, the ability to choose what you eat and market forces.

Still, if everyone in the U.S. were to reduce meat consumption by a quarter, and eat substitutes like plant proteins, it would save 82 million metric tons of greenhouse emissions each year, according to a new study in the journal Scientific Reports. If everyone went vegetarian, it would save 330 metric tons per year – roughly 5% saved.

Impossible’s website includes a 2019 lifecycle assessment report by the sustainability firm Quantis, which spells out the smaller environmental footprint of the Impossible Burger. It found that the Impossible Burger used 96% less land, 87% less water and 89% less greenhouse gas emissions.

Rachel Konrad, Impossible’s chief communications officer, said that the Impossible Burger also has public health benefits because of its reduced land, water and energy use.

“It doesn’t contribute to the antibiotics arms race or the well known risk of antibiotic resistance — one of the biggest threats to global health, food security, and development today,” Konrad said in a statement.

“If Beyond’s products help people switch from normal beef to a replacement, it’s not so bad. But it should not be the end goal,” Springmann said. “The carbon footprint of these processed plant-based products falls in between chicken and beef.”

Beyond commissioned its own lifecycle assessment, which was published in September 2018. The company has since tweaked the formula for its burgers. The report completed by the University of Michigan includes customers and consumers among the list of primary audiences for the study.

The study found that from cradle to distribution, the Beyond Burger generates 90% less greenhouse gas emissions and requires 46% less energy, 99% less water and 93% less land compared to a quarter pound of U.S. beef.

The data about U.S. beef production came from a 2017 lifecycle assessment by the National Cattleman’s Beef Association, a lobbying group for beef producers. Beyond and its vendors primarily contributed the data for the Beyond Burger.

Climate researchers called on corporations making these meat substitutes and touting environmental benefits to continue assessing the carbon footprint of their production methods.

“In principle, the processed meat substitutes makes production more efficient. In that respect, it’s a benefit, and these plant burgers could be an attractive product,” Portner said. “It also depends on the carbon footprint of [the company’s] production. That needs to be keyed into the picture.”

Springmann said that Beyond and Impossible need to better assess their carbon footprint, saying that these companies make claims about sustainability that they do not sufficiently back with data.

“At minimum, they should continually assess the carbon footprint of their companies,” he said.

Ethan Brown, founder and chief executive officer of Beyond Meat, center, celebrates with his wife Tracy Brown, center left, and guests during the company’s initial public offering (IPO) at the Nasdaq MarketSite in New York, on Thursday, May 2, 2019.

Partnering with Beyond or Impossible allow restaurants or food service companies to tout a commitment to the environment, as Sodexo did in its August announcement.

“Sodexo is committed to providing customers with more plant-forward and sustainable options as part of their diet,” said Rob Morasco, senior director culinary development, Sodexo, when the company partnered with Impossible.

In turn, by serving an Impossible or Beyond burger, Burger King or Carl’s Jr. can normalize plant-based burgers for consumers because of their meat-oriented reputation, Yarrow said.

“People say all the time that they want to eat more fish or eat less sugar, but they don’t normally do it,” she said.

Last year, McDonald’s became the first restaurant chain to commit to science-based targets to reduce greenhouse gas emissions at its restaurants and offices by 36% by 2030. While the Golden Arches has yet to offer a plant-based burger at its U.S. restaurants, doing so could demonstrate its commitment to the targets.

Big Food companies jumping in on the plant-based food trend are also using the environmental angle.

For example, when Nestle announced that it would bring a meatless ground meat product to Europe last week, it said in a tweet that it was meeting consumer demand for food “with less impact on the environment.”

Beyond Meat did not respond to a request for comment.