Ethan Brown, founder and CEO of Beyond Meat, prepares to ring the opening bell to celebrate his company’s IPO at the Nasdaq Market site in New York, May 2, 2019.

Beyond Meat stock jumped on Thursday and that’s putting pressure on the hundreds of millions of dollars that investors have bet against the stock.

The alternative meat maker will see its plant-based burgers tested at McDonald’s in Canada, an announcement that sent shares of Beyond Meat up 11.6% in trading. The move also meant those shorting the stock lost more than $80 million in mark-to-market losses on the day, according to S3 Partners analyst Ihor Dusaniwsky. Short positions have now lost more than $730 million in market-to-market losses, S3 foound.

“BYND has been a major short sale target since its IPO and short sellers have already maxed out stock borrow availability in the stock,” Dusaniwsky said in a note. 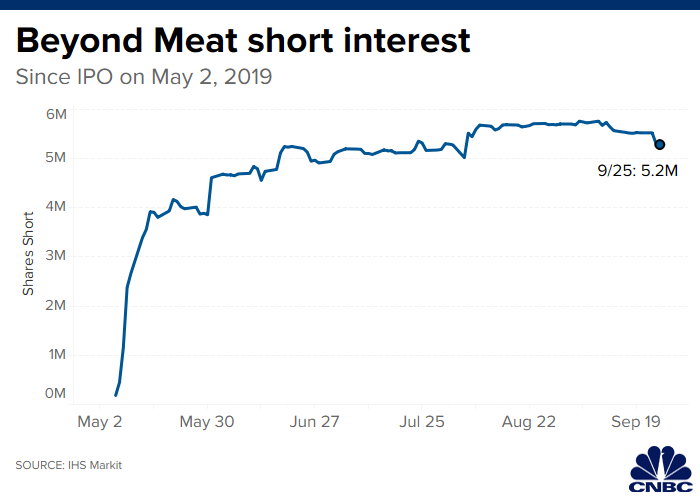 “BYND has been a short squeeze candidate for some time now, but shorts have hung onto their positions in a Tesla like fashion. But with mark-to-market losses mounting, stock borrow rates accelerating to the upside and stock recalls hitting the street the likelihood of a short squeeze is very high,” Dusaniwsky said.

Tech companies begin rerouting critical chip supplies to trucks with rail strike looming
Adidas employees raised concerns about Ye’s conduct for years, report says
Advancing The Pillars: An OECD Tax Reform Project Update
The Pantone 2023 Color Of The Year Makes A U-Turn
21 Unique Holiday Gifts For The Home To Give To Everyone On Your List