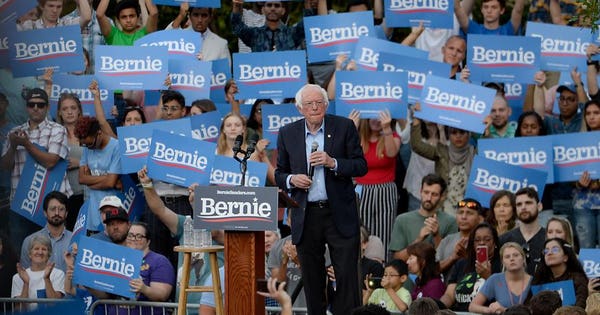 Presidential hopeful Sen. Bernie Sanders has released a new tax plan aimed at narrowing the gulf between our country’s highest- and lowest-paid workers, who frequently occupy different ends of the same company ladders for vastly different rates of pay.

On Monday, Sen. Sanders introduced his proposal for an “Income Inequality Tax” on US companies that have huge disparities in pay between their executives and their average workers.

The plan would increase corporate tax rates for public and private companies with an annual revenue over $100 million who pay their top executives at least 50 times as much as their median employees, starting at 0.5%, with higher rates for companies with even greater levels of pay inequality.

According to SEC disclosures, for example, Walmart’s CEO was paid $23.6 million last year, which is roughly 1,076 times more than Walmart’s median worker, who received $21,952. At JPMorganChase, CEO Jamie Dimon made over $30 million last year, or 381 times its median employee, who earned $78,923.

As Sarah Golshan explained this week for

This idea isn’t new. Portland, Oregon has implemented a similar tax on a local level which fully went into effect last year.

San Francisco plans to vote on a CEO tax

measure next year, and similar proposals have been considered in Connecticut, Illinois, Massachusetts, Minnesota, and Rhode Island.” The idea has also previously been aired at the federal level.

Golshan also noted that, according to a recent study, “
49 of the 500 largest publicly traded firms have a median worker pay below the U.S. poverty line for a family of four. The median 2018 CEO pay at these 49 firms is $12.3 million.”

Under Sanders’ plan, which proposes even lower acceptable ratios for executive-to-median worker pay than in previous plans, the country could raise $150 billion in revenue over 10 years, according to the campaign, which Sanders would use in part to help wipe out more than $80 million in US medical debt.

In theory, the new tax could compel large US employers to narrow their pay disparities, which have ballooned in recent decades, sending executive wages skyward and keeping most workers’ wages all but flat.

As I explained last week in response to Sander’s proposed “Extreme Wealth Tax,” these kinds of measures could help the rising number of contract and gig workers in our country to get the support and services that they and their families need desperately right now—myself included
—through either increased wages, improved social services, or both.

Because for our growing gig and contract workforce, estimated to include

a majority of US workers

We receive some of the lowest rates of pay in the nation, have little or no job security, and must cover many or all of our professional and personal costs up front: our vehicles and other equipment, for example, and our physical and mental healthcare costs, and our estimated tax payments throughout the year.

Many of us don’t have savings, let alone retirement plans or 401ks, and those of us who do get ahead tend to occupy the highest rungs of the
contractor

“staff” writers, and only the best-established artists and creators, who may still have to juggle multiple gigs.

As a group, we struggle to pay for childcare, housing, and the tools we need to perform our work (energizing
food

included). In both our job areas and the nation as a whole, we also broadly lack representation and agency, which have become ever more closely tied to wealth itself, as

Like other low-paid workers, we also have effectively no ability to secure more livable wages, outside of striking (if we can afford it) and otherwise calling for company leaders to do the right thing.

And with many large corporations, it seems the only way to get their attention is by speaking their language: that is, letting dollars do the talking, and hoping they’ll respond with sense.

See also: Gigs And AI Are Driving Us Into Digital Servitude

Millennials want to retire early at 59. Here’s how to make that happen
Inflation and rising interest rates have stressed the 60/40 investment portfolio strategy — ‘but it’s not dead,’ says financial advisor
Maine insurance agency faces online backlash after racist Juneteenth sign
There’s a growing interest in direct indexing as the investing trend becomes ‘democratized’
How They Closed It: Closing The Loop On One Of Aspen’s Most Expensive Deals Ever