The Robinhood app on IOS and Android

A move by major brokerages this week to scrap trading fees could be a direct hit to Robinhood, the start-up that kicked off the trend six years ago.

Charles Schwab, TD Ameritrade and E-Trade all announced this week that they would no longer charge for individual stocks, ETFs and options trades. Analysts say the announcements threaten Robinhood’s ability to differentiate, and puts pressure on the start-up to expand more deeply into financial services.

“Their business model is now in serious jeopardy,” UBS senior equity analyst Brennan Hawken told CNBC. “Models like Robinhood and others seem unlikely to press ahead at their current pace.”

The no-fee model has resulted in eye-popping growth at Robinhood. The start-up hit 6 million users last year and has notched a $7.6 billion valuation from its venture capital backers. Robinhood customers average around age 32 and are often first-time investors, drawn to a sleek user experience and lower prices.

But as its millennial audience ages and their net worth theoretically increase, Hawken said “they’re not going to stay at Robinhood” when they have access to a “trusted brand” with the same perks. Aside from a slick interface for unsophisticated investors, “there’s not much benefit at all” to using Robinhood now instead of TD Ameritrade, for example.

Charles Schwab CEO Walt Bettinger said in June that the firm was bringing in “hundreds of thousands of millennials every year.” More than half of their new-to-firm accounts are millennials, Bettinger said on stage at Fortune’s Brainstorm Finance conference. Those millennials also have a higher net worth on average. The retail household for those new clients has roughly $350,000 in assets, he said.

In response to the wave of announcements, a Robinhood spokesman said the changes across the brokerage industry “reflect a focus on the customer that’s been inherent to Robinhood since the beginning.”

“We remain focused on offering intuitively designed products that reduce barriers to our financial system, including account minimums and commission fees,” said Jack Randall, head of communications at Robinhood.

Price sensitivity was one key factor that has helped Robinhood stand out from its older, more established competitors. Devin Ryan, managing director and equity analyst at JMP Securities, said the announcements this week “throws a wet towel” on that business model.

“Without a doubt, that incremental customer that is price sensitive might be less apt to use them going forward,” Ryan said. “Start-ups need to continue to find ways to differentiate their business model aside from just free trading.” 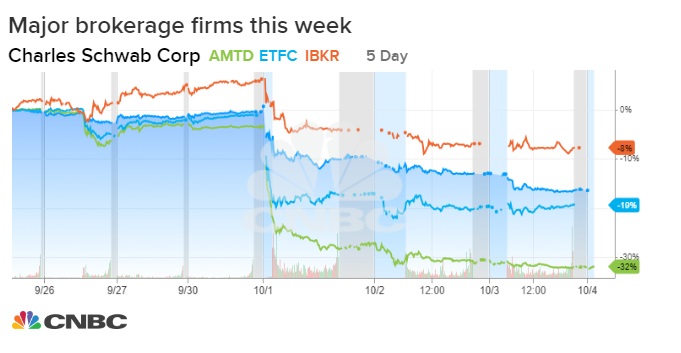 Shares of the major brokerage firms plummeted this week. Charles Schwab is down 15% this week, TD Ameritrade is down 30%, while E-Trade is down 17%.

UBS’s Hawken said part of the stock plunge was due to a perception by investors that this was poor judgement by the brokerage firms. Robinhood was never much of a threat, and going to zero was a miscalculation. In the case of Schwab, Hawken said this will cut commissions in half, and dig into earnings by 8%.

“What they lost in market cap was in line with what those revenues meant on their bottom line,” Victor Jones, CEO of zero-fee trading start-up Dough and former TD Ameritrade executive told CNBC’s “Closing Bell” Thursday.

In response to the growing fintech competition and zero-fee model, Bettinger himself has said “let’s not kid ourselves: Everybody’s paying, nothing is free … it’s just a matter of how you pay,” he said at the Fortune conference.

“If you are an account holder at a firm that is charging a zero commission, you’re just paying in other ways — whether it’s in yields on cash, whether it’s in quality of execution,” Bettinger said.

That will likely be the case now at his own firm. UBS’s Hawken said the likely outcome is some sort of expense rationalization through additional fees, or different “tiers” of accounts emerge, similar to traditional banking.

“The companies in the industry aren’t going to sit still and just allow reduction in earnings, they’ll find ways to continue to do more for the customer where they can still generate reasonable profits,” JMP’s Devin Ryan said.

Robinhood has long said the industry was going in this direction. Co-founder and CEO Vlad Tenev predicted at CB Insight’s 2018 fintech conference that the industry would eventually go to zero. The company has also told CNBC it plans to be a full-scale financial institution and that “five to 10 years from now, you should be able to open up Robinhood and get anything you could get by walking into your local Bank of America, with a better customer experience and better pricing.”

It hasn’t been easy for Robinhood to get into banking though. In December, it unveiled checking and savings account with a 3% interest rate. Just a day later, they said they were re-naming and re-launching after regulators and Wall Street sounded the alarm.

The company has also said it plans to have an IPO eventually, but hasn’t set a date or given specific details. UBS’s Hawken highlighted the challenge of high-growth start-ups, not just Robinhood, to raise money in public markets in the wake of WeWork’s troubled IPO debut.

“The days of blank checks are over,” Hawken said.

In the meantime, Robinhood is driving ahead. It announced a new Denver office this week, applied for a banking charter earlier this year, and has said it still plans on launching some version of a cash account.

“Those are not signs of a company that’s slowing down,” Gilbert said. “This is a company is on a tear. They’re not bleeding customers.”

Part of its allure to venture capital is its ability to acquire customers at a cheaper rate than their competitors. The company’s growth has largely been driven by word of mouth. Free stock trading was just “the tip of the spear” in their customer acquisition strategy, according to Gilbert.

While the bar is certainly raised on stock trading, the company will likely double down to become a more holistic financial services company.

“They’re getting customers who like the good clean experience and mobile first — I don’t think they’re going to lose customers to the incumbents,” Gilbert said. “They’re going to start emphasizing other products, and going deeper into that.”

Watchdog Sounds Alarm On $5.4 Billion Of Potentially Fraudulent Pandemic Loans
Not a fan of cruising? The hack that could change your mind
Dementia Prevention: Do You Love Your Brain?
Early retiree says breaking these 6 ‘society rules’ helped him save $1 million: ‘I wasn’t born rich’
After a tough year for crypto, here’s how to handle losses on your tax return