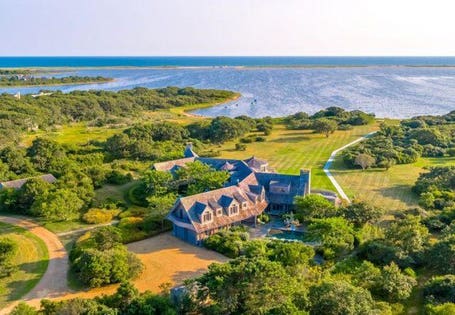 The Obamas are buying an estate listed for $14.85 million on Martha’s Vineyard

Barack and Michelle Obama, the former U.S. president and first lady, rented a seven-bedroom home on Martha’s Vineyard this summer and decided to stay. The Obamas now have the property, with a $14.85 million price tag, under contract in a deal expected to close this month.

The weathered-shingle house is set on 29 acres with private beaches along the shore of Edgartown’s Great Pond, a mix of fresh and salty water that opens to the ocean. The home has a living room with a vaulted ceiling and fieldstone fireplace, a circular dining room lined with windows, and a master suite that comes with a fireplace and a private sundeck overlooking the water.

There’s also a screened-in porch with a fireplace, a two-car garage, and a pool surrounded by a garden. The house has a winding driveway that’s more than a third of a mile long.

The seller is Boston Celtics co-owner Wyc Grousbeck, who was a contributor to Obama’s campaign in 2008 when the president won the first of two terms. But, Grousbeck played both sides of the field – he also donated to Mitt Romney’s campaign that year, according to public records.

There’s a poolside baskeball net ready for a watery slam-dunk.

Obama is known for his love of basketball, and was often photographed playing pick-up games while on the campaign trail and in the White House. While the Celtics isn’t his favorite basketball team – he told reporters last year he’d play for the San Antonio Spurs if he could join any NBA team – the basketball connection might have been a plus. The property’s listing includes a photograph of a poolside basketball net, ready for a watery slam-dunk.

The Obamas are regular summer visitors to Martha’s Vineyard, about five miles off the shore of Massachusetts’ Cape Cod. The former president and his wife, the author of the best-selling memoir “Becoming,” spent seven of Obama’s eight presidential summers on the island.

This year, the couple arrived in mid-August, on the former president’s 58th birthday. The following day, Obama was spotted at the Farm Neck Golf Club in Oak Bluffs, about eight miles from Grousbeck’s home, playing a round with former Boston Celtic Ray Allen and Golden State Warriors guard Stephen Curry.