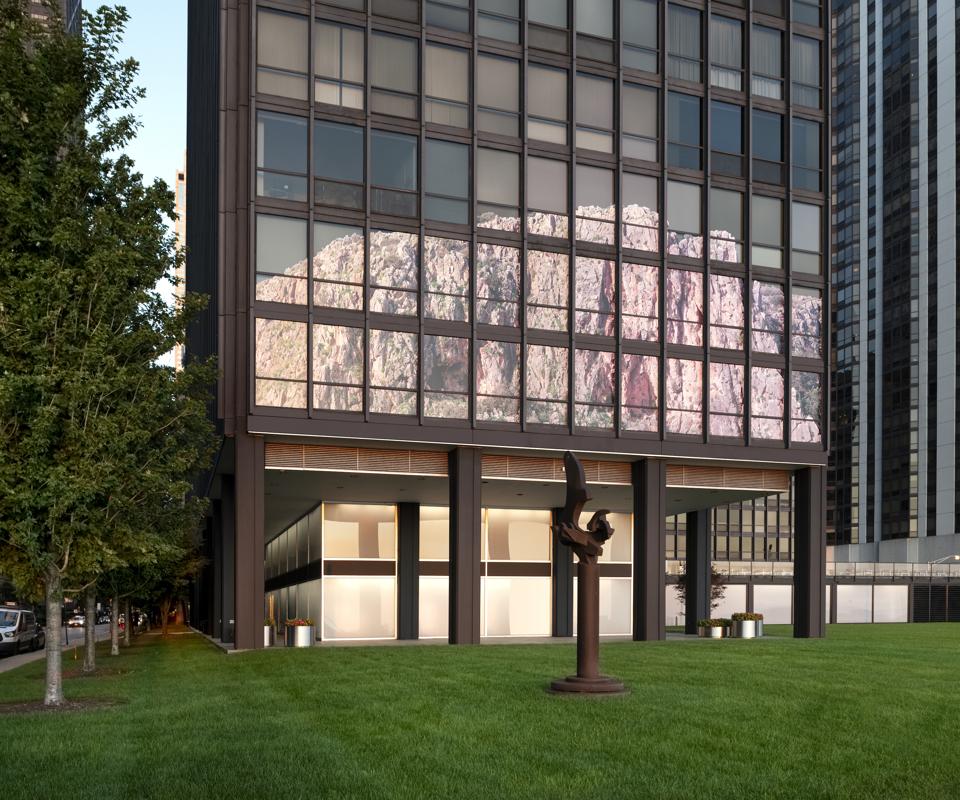 In conjunction with EXPO CHICAGO and the Chicago Architecture Biennial, Israeli-born, Chicago-based artist Assaf Evron has unveiled The Collages for the Esplanade Apartments, a temporary site-specific work mounted on the facade of an iconic Mies van der Rohe high-rise located at 900-910 N. Lake Shore Drive.

Built in 1956, the Esplanade Apartments were the first high-rise buildings designed by modernist architect Ludwig Mies Van der Rohe to fully implement a continuous exterior curtain wall separate from the structural frame. In his artist’s statement, Evron states that “Mies van der Rohe’s buildings explore the relationship between nature, art and architecture, merging them into one aesthetic.” Evron’s work seeks to “use Mies’ logic and apply it onto his building. The caves–a natural residential high-rise–create a juxtaposition between the natural and modern architecture.” Evron considers this collage to be a celebration of his homeland of Israel, as well as an homage to the collage work of the building’s legendary architect. To create the piece, which is visible via Lake Shore Drive, Evron recreated aspects of an Israeli mountain range over the building’s windows.

Esplanade Condo Association Board Chair Trinita Logue quoted the cost of the project as $28,000, which was funded by a variety of sources, including grants given to Evron, resident-sponsored fundraisers, in-kind design services, and outside vendors. Logue also noted that the condo association is supporting the project through the work of the property manager and building staff, adding that the response from residents has been overwhelmingly positive.

“I purchased my apartment, a lake-facing studio, because it is an incredibly functional and beautiful use of a small space. I consider it part of my art collection. I think others see its small beauty, too. I am tickled that Assaf approached us to be the ‘canvas’ for his installation, a commentary on home.”