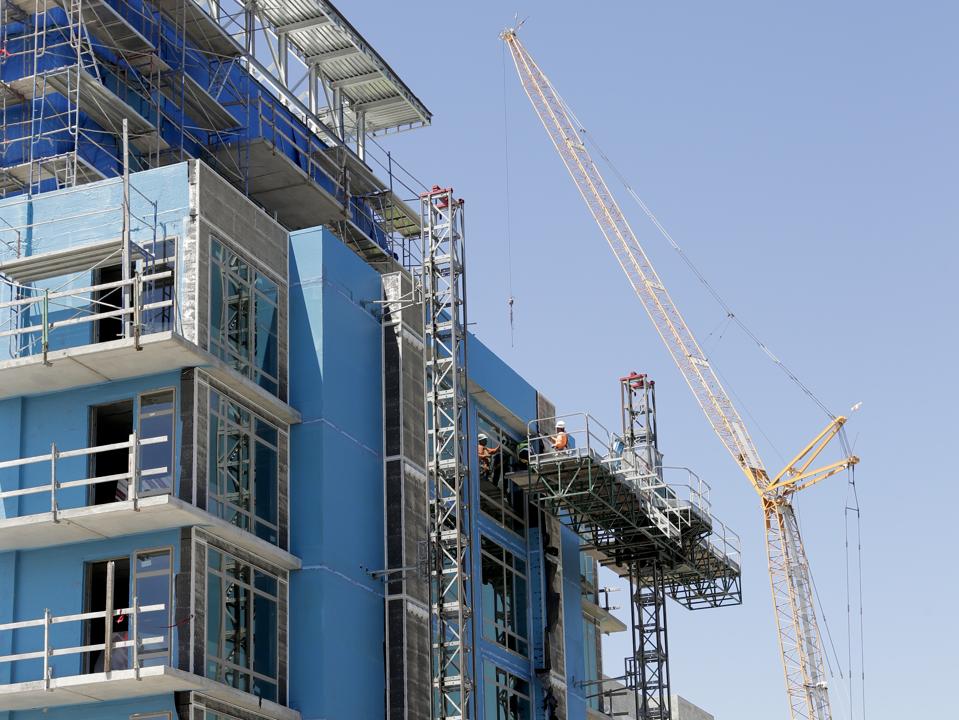 Apartment construction was expected to peak in 2016/2017 according to many industry watchers and participants, but evidently the market didn’t get the memo. It seemed like the boom in rental apartment buildings was ending when a slug of new apartment deliveries began to put pressure on rents and occupancies three years back, but the market ended up strengthening again. Multifamily construction has surged 31% in the latest monthly data, with the pace of development of apartments and condos nationwide hitting 424,000 in August. Multifamily starts (mostly consisting of apartment buildings) were up 13.7% compared with the same month a year earlier. And there has been no increase in vacancy overall despite this new supply. As a matter of fact, the rate of apartment construction has just been keeping up with demand in most areas of the country, which explains why rents have continued to rise (albeit more slowly now than four or five years ago), and vacant units remain scarce.

Household formation rates have surged from the low of 400,000-500,000 per year at the bottom of the housing crash to 1.5 million per year today, well in excess of the rate of home construction. The vast majority of the newly-forming households are looking to rent, not own.

Although the runway is not as long as it was back in 2011, when the apartment boom was just getting rolling, the strength of rental apartment demand today remains impressive. The apartment company executives interviewed for this story stated that demand has been remarkable, and it has not abated.

A big part of the story behind the continued strength of the apartment sector is innovation. Multifamily developers have radically changed and adapted their buildings much more drastically than single-family builders have done.

A new trend has emerged, in which higher-income householders are more often than in the past choosing to rent when they could easily buy a home. The number of renters earning at least $75,000 (adjusting for inflation) rose by 311,000 households in 2017-2018 alone. This has supported demand for luxury apartments. Casey Cummings, CEO of Ram Real Estate, confirmed, “Demand has been strong, particularly for the best units in our most upscale communities. The higher income residents tend to be more discerning, and are more focused on quality than price. Our biggest and best units lease quickly.”

The average age of renters has shifted as well. Households in the 55-and-over age group make up a quarter of all renters, and there is strong rental demand among those people whose children have grown up and left the nest. These parents are often ready to leave the suburbs behind and move into a cosmopolitan and vibrant downtown, in a building with spectacular amenities.

The latest wave of rental demand is appearing in the suburbs. Early in the cycle, the suburbs were not given as much development as the urban core. “Now the suburban markets are tight, and we see more opportunities in the suburbs than we do in the urban areas,” said Greg West, CEO of ZOM Living.

Amenities in high-end apartment buildings have gone well beyond the gym and pool. Upscale renters increasingly demand features that can include dog-walking trails, package rooms (for accepting deliveries of packages and groceries), yoga spaces, art parks, automation, health and wellness related services, and, of course free WiFi. Mobility features like bicycle storage and access to transit are also important in some markets. Some of the apartment buildings being brought to market today have lobbies with retail vendors that can be patronized by the general public, and some buildings have gardens where tenants can grow their own fresh vegetables and fruit.

The latest weapon in the amenity war is co-working spaces, which include communal working spaces as well as conference rooms. Think of them as a 21st century version of the business center. “More and more people are working from home, and they want a place to work that is outside of their actual living space,” said West. These working areas are typically positioned near the lobby of the building, but far enough away from noisy common areas that people can make telephone calls or think without distraction.

Another new amenity is “maker spaces,” which can include collaboration space and materials for crafting, which can include 3D printers. Another version of this creative space concept involves a recording studio.

Easy access to transportation is another way to appeal to prospective renters, that is not limited to buildings that are near a commuter rail line. Amenities can be in the form of dedicated ride-share drop-off space for Uber and/or partnerships between the building and ZipCar and other car-sharing services.

The outlook is positive. Rent escalations have continued to outpace median income growth, permitted by the fact that the key renter groups have been experiencing stronger-than-average income improvement. Per-capita median income growth for people aged 25 to 34 averaged 11.3% in 2017, compared with 2.9% for the overall population. The 55 year-old renters are at the peak of their lifetime earnings, and have a lot of options to choose the lifestyle that they want. Add to these trends the imminent surge of demand from Generation Z, and you have an apartment sector with a great deal of support.

Going forward, one additional factor that will tend to keep occupancy rates high is the ongoing removal of hundreds of thousands of rental units from the supply. This stems from the reversion of massive numbers of rental single-family homes back to occupancy by the owners. The Harvard Joint Center for Housing Studies stated in a new report that there was a decline in the rental stock of 338,000 units in 2017, but that “most were single-family homes and apartments in two- to four-unit buildings that likely converted to owner occupancy.” The result: these ongoing shifts in the existing stock are likely to prevent a significant softening of rental markets.

Even if (when) a recession comes, the rental apartment industry is expected to weather the storm reasonably well. In past recessions, rents has only gone down a small amount, and typically rebounded rapidly afterward. Though memories of the horrors of the 2007-2010 downturn are still vivid for many, it is important to bear in mind that the next recession will not be led by or caused by housing.

“Apartments always work long-term, as long as you have good product,” said Dan Kodsi, the CEO of Royal Palm Companies.

That being true, apartment developers need to stay sharp. “Competition is fierce. You have to compete or the market will leave you behind,” said West.

Anti-abortion states split on how to enforce ban, whether to prosecute or surveil doctors
Worried about an economic downturn? Here’s what you can expect in a typical recession, according to economists
There’s a growing interest in direct indexing as the investing trend becomes ‘democratized’
Average credit card interest rates have topped 20%. Here’s how to pay down that debt fast
Stocks making the biggest moves premarket: CarMax, FedEx, Seagen and more