In this photo illustration, packages of Beyond Meat “The Beyond Burger” sit on a table, June 13, 2019 in the Brooklyn borough of New York City.

Investors have overestimated the potential size of the the planet-based meat industry, which could end up smaller than the plant-based milk industry, according to D.A. Davidson.

The firm slapped an underperform rating (equivalent of a sell) on the biggest player in the space, Beyond Meat. The meat alternative company’s stock trades around $160 per share, while D.A. Davidson gave the stock a $130 price target.

“Our cautious approach to the total addressable market — specifically, fewer likely frequent purchasers of plant based meat as compared to milk given roughly half the number of non meat eaters versus lactose intolerant—informs long term forecasts we believe are lower than the consensus view,” said D.A. Davidson senior research analyst Brian Holland.

Shares of Beyond Meat have soared nearly 550% since its initial public offering in April, as investors bank on the plant-based meat industry reaching billions of dollars. Holland says some firms’ long term forecasts are too high as the total addressable market for plant based meat in the U.S. could end up being smaller than that of milk alternatives. 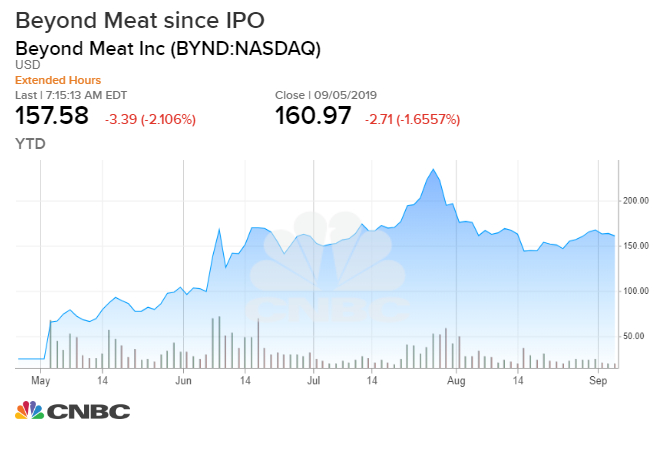 Holland said he estimates the same 50% of American adults who purchase plant-based milk are also interested in plant based meat; however, only half of the group has to find a meat solution, compared to plant-based milk drinkers that may have a milk allergy.

In term of competition, Beyond Meat has a “decided edge” with its fast growing retail distribution and strong visibility. But Holland said larger players with more resources are likely to enter the space.

The firm estimates by 2028, Beyond Meat could have 31% share of the plant-based meat market.

Shares of Beyond Meat ticked 3% lower in premarket trading on Friday.

— with reporting from CNBC’s Michael Bloom

Stock futures slip after the S&P 500’s worst first half since 1970
Consumer sentiment survey followed by the Fed shows inflation expectations ease slightly
RH shares slide after company lowers its outlook for the year
How much money do gas tax holidays actually save drivers? What we know, based on 3 states that put temporary suspensions in place
There’s a growing interest in direct indexing as the investing trend becomes ‘democratized’