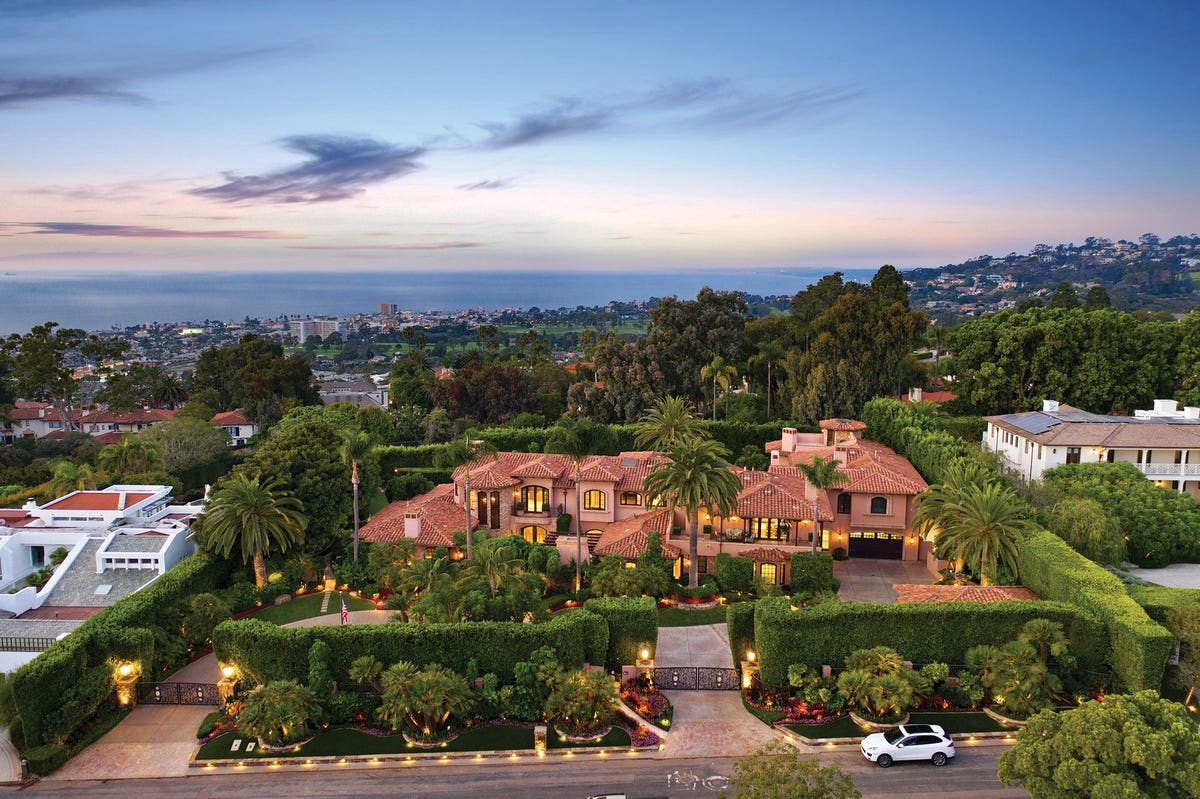 Muirlands is among the oldest of the 16 areas making up the coastal San Diego neighborhood of La Jolla, California.

The community of more than 1,000 homes is characterized by grand estates, ocean vistas and towering pine and eucalyptus trees.

Although often mistakenly thought to be named after naturalist John Muir, City of San Diego and State of California sources point to developer and real estate broker Harold James Muir as the namesake.

Harold J. Muir bought some 257 seaward-facing acres on the western slopes of Mount Soledad in the 1920s and set about creating an 18-hole golf course with a clubhouse. An exclusive enclave of homes, set on large lots and surrounded by gardens, followed.

Development stalled during the Great Depression, and another wave of home building took place in the 1950s.

This Mediterranean-style trophy home is emblematic of the type of estate that makes up the community. Situated on an acre, it captures views of La Jolla Village, La Jolla Country Club and the Pacific Ocean.

Tall hedges and fences enclose the landscaped grounds, which are accessed by two gated entrances that open to a semi-circular driveway. Arched windows, rotundas and multiple gables add visual interest to the residence, which is topped by a red-tile roof.

Arched wrought-iron and glass doors lead to a courtyard at the front of the home. A matching set open to the foyer, which has an inlaid mosaic tile floor and a gently curving staircase to one side.

The recently redone mansion is set up as both a livable family home and as a place to undertake more formal grand-scale entertaining.

Lofty ceilings and rich details can be found throughout the European-influenced interiors including in the living room, family room and formal dining room. An elegant marble-topped bar with a built-in aquarium looks out onto the garden. A game room and a movie theater are upstairs.

The primary suite, accessible by staircases as well as an elevator, takes full advantage of the sunsets. Including several secondary bedroom suites, there are a total of five bedrooms and 11 bathrooms throughout the more than 12,000 square feet of living space.

The two attached garages can accommodate at least five cars. A free-standing bonus structure could be used for additional parking or customized for any number of uses.

San Diego International Airport is less than 14 miles away from the property.

PropTech Shows Its Strength With Rise Of Another Unicorn In Digital Marketplace Lessen
How to score a write-off on ‘Giving Tuesday’ if you don’t itemize deductions
Building Back Biden’s American Start-Up Through Tax Incentives
3 Ways Pre-Retirees And Retirees Can Use U.S. Series I Savings Bonds
White House unveils ‘Space Priorities Framework’ as VP Kamala Harris leads first space council meeting