So far, businesses in the services sector have been growing at a decent pace and withstanding the headwinds that have hit manufacturing.

Economists expect services remains strong but at a slightly slower pace than last month. The next reading to gauge the progress of that sector is Thursday’s 10 a.m. ET release of the ISM nonmanufacturing index. According to Dow Jones, the consensus forecast is 55.3, a number that shows a healthy rate of expansion though that would be down from August’s 56.4.

Anything above 50 shows expansion. Earlier this week, ISM U.S. manufacturing purchasing managers’ index dropped to a surprising 47.8 for September, the second month of contraction, and a decade low.

Following that report, ADP’s private sector payroll data Wednesday was slightly softer than some expected at 135,000 and included revisions that cut 38,000 from August’s payrolls report.

“If for some reason, [ISM services] drops to 52, 53, anything that’s below consensus … that would raise the concern that services output is beginning to slow as well, and you’d get that same picture if employment is weak as well,” said Michael Gapen, chief U.S. economist at Barlcays.

The big report for the week comes Friday, when the monthly employment report is released, and it is expected to show 145,000 jobs were added in September, according to Dow Jones.

Both reports are being watched closely after Tuesday’s shockingly weak ISM manufacturing report set off new fears a manufacturing recession could spill into the broader economy. That sent stocks reeling and bond yields lower. The Dow was down as much as 598 points Wednesday, after a 343-point decline Tuesday.

“So far at least, the ISM services sector seems to be holding up pretty well, which is really important. It’s basically 85% of the U.S. economy,” said Ward McCarthy, chief financial economist at Jefferies. “The decline in manufacturing has been ongoing since the beginning of the trade war and has been exacerbated by the Boeing 737 Max problems and now the GM strike.” 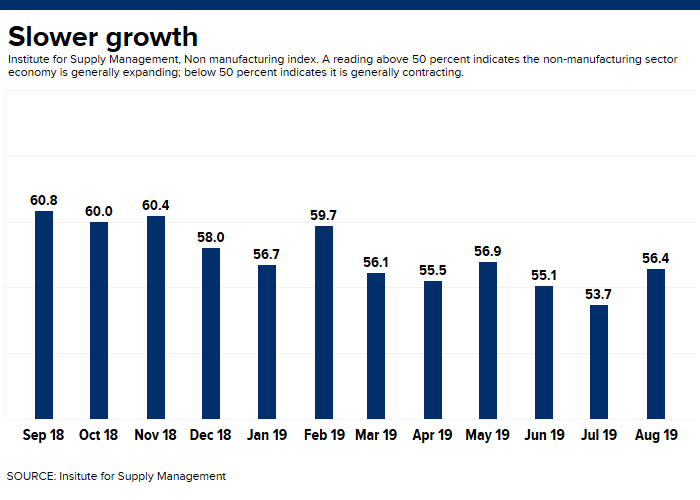 As stocks sold off, the fed funds futures market began to indicate a greater chance of a Fed rate cut for the Oct. 29 and 30 meeting. Before ISM manufacturing, the odds for a quarter point cut were about 40%, but they have since shot up more than 75%.

Gapen said a first big warning sign about the consumer, which has been propping up the economy, came Friday when the personal consumption and spending data showed consumer spending slowed in August, Household spending edged up just 0.1%, compared to growth in the first seven months of the year which averaged 0.5% a month.

“We’re looking at an economy that is being held up by the consumer and services sector. The ISM services is a key into how you think the economy is doing. … We are cautiously awaiting this number, and don’t see any impetus for a bounce back until see the tariff situation put on hold and with no further escalation, or a removal of tariffs,” said Luke Tilley, chief economist at Wilmington Trust.

Tilley said if the tariffs are removed and a deal is struck, he expects the economy to do well. If not, the economy could be in recession next year.

Gapen said he does not expect the tariffs to be removed soon. “The economy may be transitioning from a state of expansion to a stall speed outcome,” Gapen said. “You’re running the risk of another shoe dropping, sending you into recession.” He said the odds of recession over the next year are 25% to 30%.

As Italy’s Population Declines, More Towns Offer You Money To Live There
Potential News Corp, Fox reunion faces opposition from large shareholder
Biden administration to extend payment pause on student loans until after June or when legal challenges resolve
For Emily Dickinson’s Birthday, Visit Her New England Home
What borrowers need to know while student loan forgiveness is in limbo