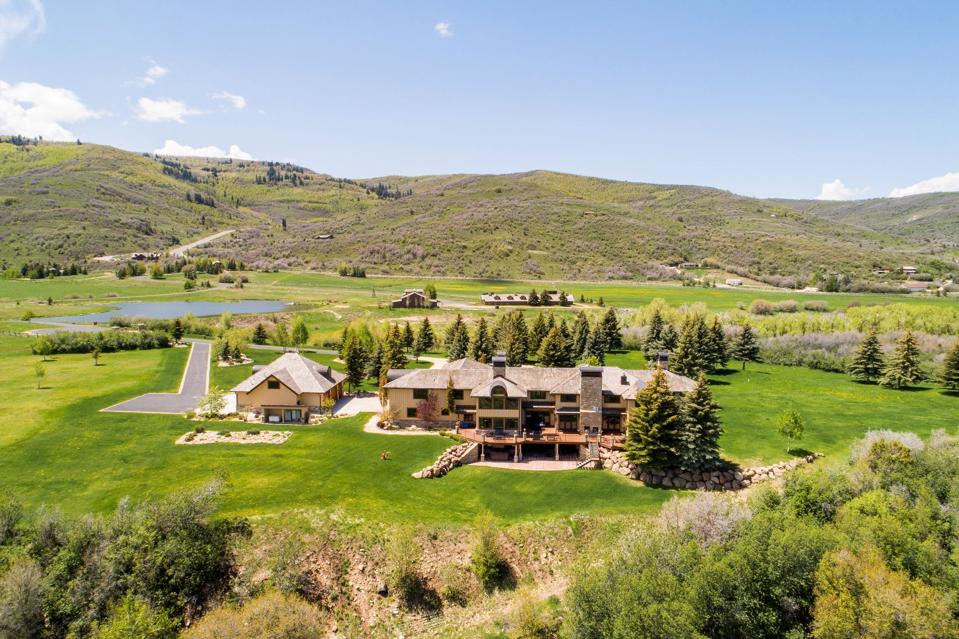 Anyone with $45 million could buy a sprawling ranch in northern Utah that stretches across four counties. Once home to Debbi Fields of Mrs. Fields Cookies fame, the property on more than 200,683 acres is being sold as a turnkey operation complete with homes, furnishings, ranch equipment and machinery, cattle, grazing permits, water rights, trophy elk hunting rights and mineral rights.

Touted as a once-in-a-lifetime opportunity to own a piece of the American West, River View Ranch is listed by Kerry Oman and Thomas Wright of Summit Sotheby’s International Realty. “It’s just an incredible opportunity for somebody,” said Oman. “These large tracts of land rarely come up for sale.”

The ranch gets its name from the Woodland, Utah estate where the 17,000-square-foot European-style manor sits on a bluff overlooking the Provo River, about 30 minutes from Park City, Utah. Winter rangeland near Vernon, Utah encompasses about 50,000 acres. The total deeded acres of the ranch are 41,237 acres.

“While she was putting it together, she traveled to Europe,” he said. “She bought stained glass windows. She bought a couple of bars that she shipped over from Ireland and Scotland as a fun design element.”

One of the most dramatic pieces of art is a Scottish stained glass window depicting Mary Magdalene that is above the stairs in the entry.

The estate home has been used as a corporate house. “It has 10 bedrooms all en suite,” said Oman. “The owners used it as a primary residence for a little while, but it’s more of that kind of corporate retreat type of property. It has big ponds over a mile over the Provo River. It’s really one of the finest estate homes in Utah.”

In addition to the 10 bedrooms, the Woodland estate includes 14 bathrooms, 11 fireplaces, three family rooms, a large gourmet kitchen, formal dining room with woodwork imported from Europe, a great room with walls and ceilings covered in black walnut, an office with teak and walnut woodwork and a basement where one can unwind in the sauna, shoot pool or cozy up to the bar that was imported from Scotland.

Two large ponds are ideal for water sports, and there is also more than a mile of private access to the Provo River. One can also saddle up in the 24-stall barn and ride in the arena or take off for hours riding around the ranch.

After Debbie Fields’ cookie chain filed for bankruptcy protection in 2008 to help restructure its business, the property went into foreclosure and soon fell into a state of disrepair. In 2011, the property was sold to Jeanette Brooks, co-founder of Reno, Nevada-based MXI, the company behind Xocai chocolate, and her husband, Martin. The estate was completely remodeled to enhance its original grandeur.

In an interview for Mountain Express magazine about the estate, Jeanette Brooks said, “It was a dilapidated mess when I bought it. The portico had detached from the house. Windows were broken or missing. But the bones were good and the property was jaw-dropping. I knew it was worth preserving and decided to renovate it. It looked hopeless, but I was up for the challenge.”

“Mrs. Brooks put millions of dollars into restoring it back to a nicer state than it ever was before,” said Oman. “And during that time, she spent excessive amounts of money furnishing it. So we’re offering it fully furnished. It’s a turnkey property.”

Oman said the desire to be in the cattle business is what motivated the Brooks to take the plunge and buy the property.

“They put together multiple parcels all over the state and combined this really large ranch. It was part of their dream to have in essence a piece of the American West,” he said, adding that “they decided to put it all up as a turn-key operation and sell all of the River View Ranch holdings — furnishings, home, cattle, water rights, mineral rights, hunting rights, just everything. That’s where this opportunity comes in, and that’s why it’s unique as well.”

There are some opportunities for gold mining at a small mine two miles south of the ranch.

One has to wonder if a ranch is just another thing rich people can spend their money on. Oman said, “The ultimate buyer is probably somebody who has some money and needs to put it somewhere and would rather put it in land and that kind of asset instead of keeping it in the market.”

He said would-be ranch owners who tend to find the property appealing include “a lot of those wealthy people out there who are buying ranches now in Montana, Wyoming and different parts of the American West and really have that connection to it. Those are the people who tend to be calling me and asking questions and doing some research on it.”

Lest any tenderfoot cowpokes have concerns about the potential headache of overseeing the operations of a ranch and caring for livestock, Oman said, “You wouldn’t necessarily have to be a hands-on owner. They have a full-time ranch manager who also has other people who help him. It’s something that you can own and not participate in very much or you can come out and take a very significant role in how it operates.”

Ranch manager Shorty Williams has worked the ranch for years. “His knowledge and expertise will be vital to anyone who purchases the ranch,” said Oman. “It’s just so natural for him to be on the back of a horse and herding cattle. He’s just a real cowboy, but just very smart with the business. He’s done it his whole life. It’s like he was born on a horse. We anticipate that whoever buys this would keep him on. He’s such an integral part of the operation of the ranch.”

Take a virtual tour by clicking here to watch the video. An online brochure gives detailed information about the property.

Fed officials see smaller rate hikes coming ‘soon,’ minutes show
In Defense Of Brutalism
How Congress may make it easier to set money aside for emergency expenses
One Thing That’s Cheaper Now: Hearing Aids For Aging Parents
When Mark Cuban bought the Dallas Mavericks, he refused an office or big desk—here’s why