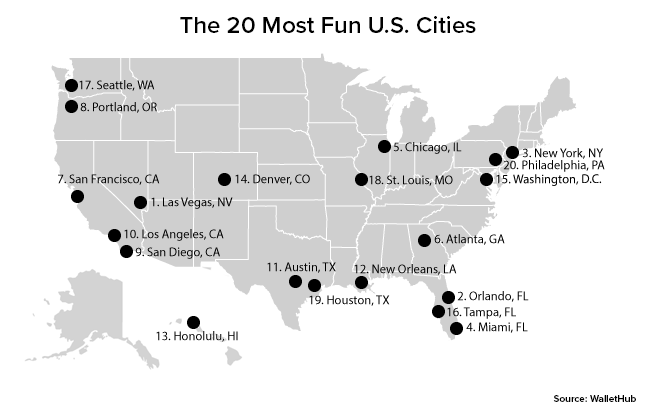 WalletHub looked at 66 metrics to measure just how people have fun in an urban environment. The study took in the 150 largest U.S. cities plus at least two of the largest in each state.

More from Personal Finance:
How, and whether, to pick a travel rewards credit card
Owe back taxes? You might lose your passport
App makes clearing US customs, immigration a breeze

“This study incorporates cost of living and ticket prices to rank the most fun cities that are also budget-friendly,” said WalletHub analyst Jill Gonzalez. “A fun city is one determined by its options, accessibility and cost-effectiveness in terms of entertainment, recreation, parties and nightlife.”

Some cities, like New York, are just so much fun that they ranked near the top of the list despite sky-high local prices. The Big Apple, for example, boasts the most restaurants and playgrounds “per square root of the population,” according to WalletHub, at 7.5023 and 0.6241, respectively. (Click here to see the methodology.)

That’s more than 30 times the number of eateries in Peoria, Arizona — the U.S. city with the fewest restaurants, at 0.2464 — and 19 times more playgrounds than Hialeah, Florida, which has the fewest playgrounds (0.0328). Results like those land New York in the No. 3 spot in the list of most fun cities despite its poor ranking — dead last, at 182 out of 182— for cost-effectiveness. (Santa Rosa, California; Juneau, Alaska; Boston; and Yonkers, New York, rank with the City That Never Sleeps as the nation’s priciest places.)

Las Vegas tops WalletHub’s latest list of the 20 most fun cities in the U.S.

So where can you find the most fun for your funds? Here are the 20 cities that landed at the top of WalletHub’s list, starting with first-place finisher Sin City:

Tax season starts with boosted IRS workforce, new technology as agency begins to deploy $80 billion in funding
Be Aware Now: Here’s Where SECURE 2.0 May Hand You Unexpected Benefits
Why The Renters Bill Of Rights Won’t Help Much
Binance was final destination for millions in funds from Bitzlato, exchange shut down for alleged money laundering
High Housing Costs Drove Relocation For A Record 25% Of Home Buyers At The End Of 2022